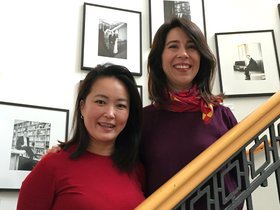 They embody the entrepreneurial spirit of the Bucerius Master of Law and Business: María José Rojas from Chile (Class of 2011) and María Kim Shin from Bolivia (Class of 2012) recently founded their own consultancy. Their company, Kim & Rojas Legal Business Latin America Consulting (KRLB), provides legal and business consulting services to European companies striving to delve into the Latin American market or to expand their operations in the region.

We caught up with the industrious two graduates to hear more about their venture.

How did you come up with your business idea?

We had the opportunity to work in different projects in law firms and companies in Germany. There, we realized that as a foreign lawyer in Germany it is very difficult to make a career, especially in the traditional law firms. Furthermore, we also saw that there was an untapped market for our services, especially our knowledge of the Latin American legal systems and the ability to bridge the cultural differences between Latin America and Germany when negotiating and carrying out new businesses. We also understood that those who are actively and more broadly venturing into Latin America, are small and medium size companies that do not necessarily have the resources to hire a large international firm and do not have the access to appropriate local legal advisors. That’s why, in September 2015, we founded KRLB. Our main objective is to be our client’s “Legal Project Manager” for all issues regarding Latin America.

How did you become partners, seeing that you weren’t in the same MLB class?

We had met a few times during 2011 and 2012. We really only started talking and becoming friends after the program, though, since not many MLB graduates from our classes had stayed in Hamburg and we were both living very similar experiences. We both married German attorneys and were raising children here in Germany with no family around. At first, it was mostly for emotional support, but soon we realized that we had many things in common, especially regarding our professional ambitions and ideas for the future. That is when we began discussing the idea of starting KRLB.

You both had extensive work experience and multiple degrees before you studied at Bucerius Law School. What made you decide to pursue another degree?

It’s true, we both came to Bucerius Law School with multiple law degrees from prestigious universities in our home countries, Spain and the United States. We had also already gained extensive work experience as lawyers and partners in the fields of M&A, corporate law and competition law.However, we both agree that pursuing a higher education, such as a Master’s program in a new country, is one of the best ways to be exposed to the professional and cultural environment of said country. This is especially true for the MLB program, given that it is not only geared toward the legal profession but also toward the business community.The program was a good choice to quickly learn and fully integrate into the German legal and business cultures through the activities and classes as well as the relationship with professors and students, while at the same time getting a broader international view provided by the international faculty and fellow students.

How has the MLB degree helped you set up your own business?

First and foremost, it provided us with the tools to start a company in Germany. The Entrepreneurship and Corporate Law classes gave us the necessary insights on what we needed to found KRLB. Furthermore, the program offers excellent networking opportunities, which helped us get in touch with in the German law and business market.Last but not least, having a degree from a top-ranked university in Germany means that both business people and other lawyers acknowledge us as professionals of excellence. Even though we both studied at world-renowned institutions abroad, the prestige of our German degree added an additional value to our company: from the first moment we have been considered trustful partners to do business in Latin America.